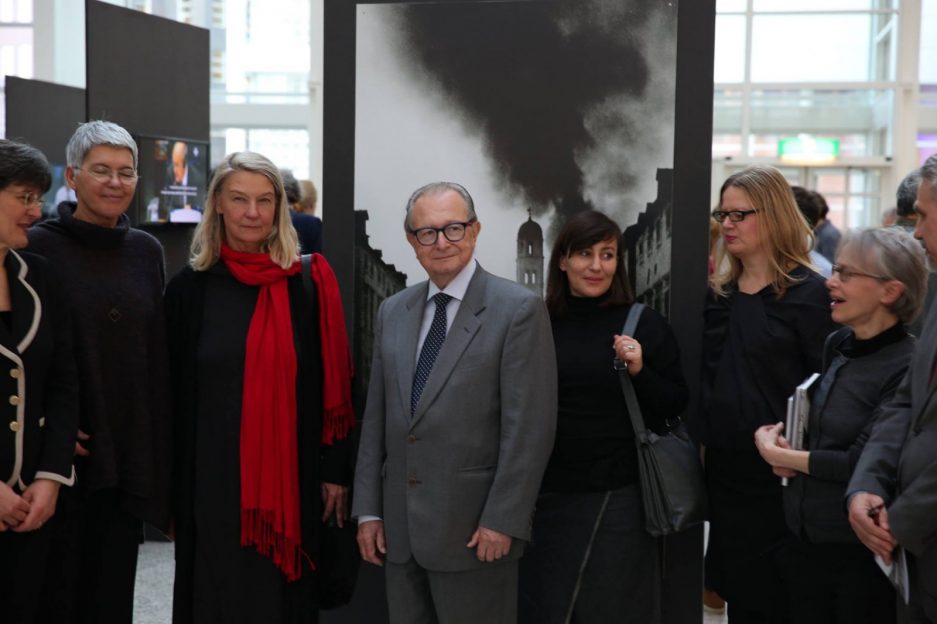 The exhibition ‘Targeting Monuments – Targeting History and Memory’ was launched on 4 April in the Atrium of the City Hall of The Hague after a series of exhibitions held in 2017 in Belgrade (Serbia), Sarajevo (Bosnia and Herzegovina), Zagreb and Pula (Croatia).

Around 100 participants gathered at the vernissage of this exhibition dedicated to the systematic destruction of cultural and religious objects in Bosnia and Herzegovina, Croatia and Kosovo during the wars in the former Yugoslavia from 1991 to 1999.

Europa Nostra has fully supported the wider aims of this project developed and implemented by SENSE (Centre for Transitional Justice, Pula, Croatia) and Documenta (Centre for Dealing with the Past, Zagreb, Croatia) together with the Humanitarian Law Centre (Belgrade, Serbia), and the Historical Museum of Bosnia and Herzegovina (Sarajevo) with the support of the EU ‘Europe for Citizens’ programme and the Dutch Ministry of Foreign Affairs. Our European federation of heritage NGOs was pleased to put this project in a wider European context, especially this year when we celebrate the European Year of Cultural Heritage 2018.

In his remarks, Geert Dijkstra recognised the importance of raising people’s awareness of the multiple threats to cultural heritage across Europe, and stressed that the “preservation of cultural heritage requires combined efforts to bring peace, justice, and reconnect people together”.

Sneška Quaedvlieg-Mihailović, reminded that the European Year of Cultural Heritage 2018 is the perfect occasion to emphasise the value of our shared history, our shared memory and our shared cultural heritage for shaping a more peaceful and more cohesive Europe. With great emotions, she added that “Shock, sadness and grief are the first reactions when faced with the panels of this exhibition, which share a few lessons with us. The first lesson is that cultural heritage is a very powerful asset. It can be a resource and inspiration for art, cohesive societies, sustainable development and innovation, but also a dangerous weapon. The second lesson is that we must give a much stronger political priority to culture and education with adequate policy and funding”.

The exhibition is based on the interactive narrative ‘Targeting History and Memory’, which shows the way in which crimes against cultural, historical, and religious heritage were investigated, reconstructed, and processed at the ICTY based in The Hague. “With narratives like this one, we are trying to make visible, easily understandable and widely accessible, the heritage of the ICTY“, said Mina Vidaković presenting Mirko Klarin’s remarks.

The former President of the ICTY Judge Carmel Agius opened the exhibition with a powerful statement. “The destruction of cultural heritage or property is a crime designed to strike at the very identity of people which constitutes a crime against humanity. This exhibition relates to a significant aspect of the ICTY’s work, which must and will remain relevant and impactful well beyond the closure of the Tribunal,” he said.

The exhibition is on display at the Atrium of the City Hall of The Hague until 16 April. On this occasion, Europa Nostra, together with the European Cultural Foundation, is organising the book presentation for Governing Heritage Dissonance: Promises and Realities of Selected Cultural Policies – a pioneering study by Višnja Kisić, Researcher and Secretary General of Europa Nostra Serbia wo contributed to the exhibition catalogue, on 12 April 2018 at the House of Europe in The Hague.