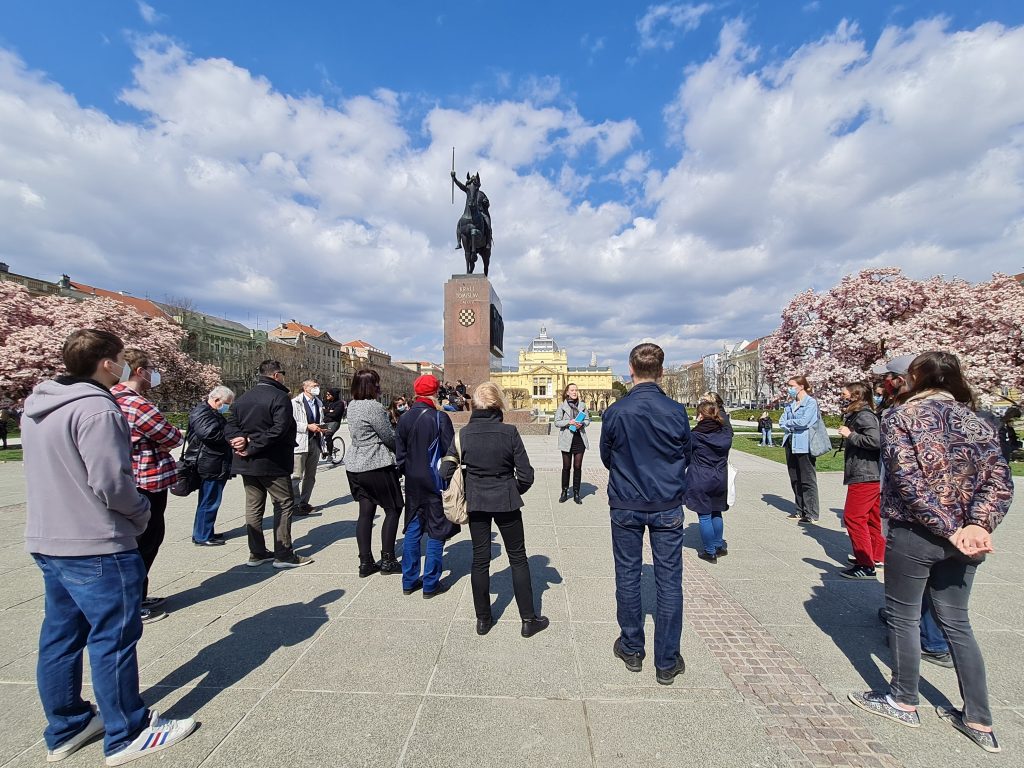 Remembrance – walk through Zagreb and presentation of the guide “Zagreb in war, resistance, creativity and memory”

On Saturday, 27th March 2021, on the 80th anniversary of the beginning of the Second World War in Yugoslavia, the first of historical walks through Zagreb was held. The remembrance walks are part of the activities by which Documenta – Center for Dealing with the Past wants to introduce the public to Zagreb as a place of suffering and resistance by visiting important locations related to the operations of the Ustasha regime, crimes, places of suffering during World War II and the development and most important actions of the illegal movement of anti-fascist resistance. At the beginning, the Director of Documenta, Vesna Teršelič, addressed the epidemiologically allowed number of gathered participants. The walk itself was led by Tena Banjeglav, a researcher for Documenta and one the authors of the guide “Zagreb in war, resistance, creativity and memory”. The walk was joined by the representative of the Croatian Parliament and actor Vili Matula, the Austrian Ambassador Nj.E Josef Markus Wuketich and representatives of the US Embassy, as they facilitated the preparation and presence of the guide and the Australian Embassy.

The remembrance walk started with a gathering at today’s Student Center, former “Zagrebački zbor” or “Zagrebački velesajam”, which served as a concentration camp for Jews, Serbs, communists, illegals and other undesirable groups who were transported from there to the first concentration camps established in the NDH – Danica near Koprivnica, the Gospić camp system (Gospić, Jadovno, Slana and Metajna on Pag), and later Jasenovac and its camp system. During the hour-and-a-half walk, the participants visited other selected locations, such as the former Ustasha youth home in Runjaninova Street, where the Health Center building, the Botanical Garden, the Central Station, the former Synagogue in Praška Street, or the prison at Franje Račkog Street 9 are located. The remembrance walk ended on the “Trg žrtava fašizma” near the famous “Mosque”, in the vicinity of which are the buildings of the former Gestapo prison or the headquarters of the Ustasha surveillance service. During each of the announced memorial walks, various locations will be visited in order to see as many places in the city of Zagreb as possible.

The guide “Zagreb in War, Resistance, Creativity and Memory”, within which the remembrance walks were designed and organized, are supposed to enable students, young people, but also all those interested to learn, about historical events hidden in more than 50 city locations associated with the Ustasha regime and anti-fascist resistance that is underrepresented in the education system and public space even though World War II topics are common in political and social life.

The online promotion of the guide has been held on the 6th April 2021 at 11 am, the day World War II began in this area. Also, the guide is publicly available on the Documenta website and can be downloaded at the following link: ttps://documenta.hr/publikacije/ 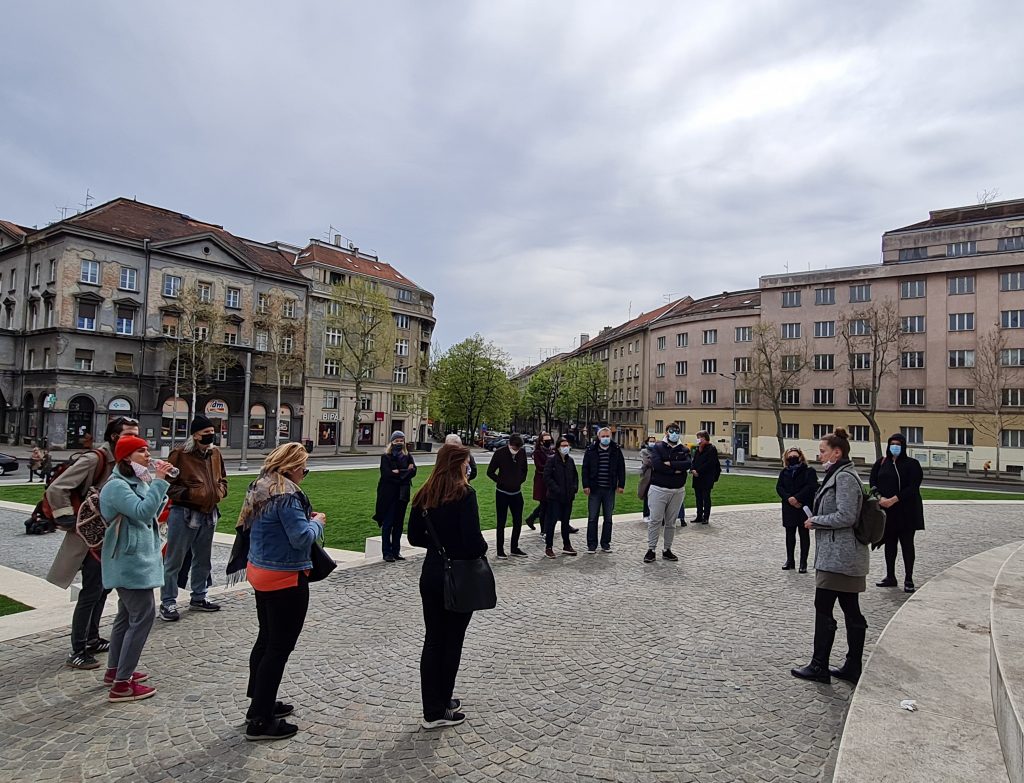 Organized by Documenta – Center for Dealing with the Past, on Saturday 10th April 2021, on the occasion of the 80th anniversary of the proclamation of the so-called Independent State of Croatia (NDH), the second remembrance walk through Zagreb took place. The remembrance walks are part of the activities by which Documenta – Center for Dealing with the Past wants to introduce the public to Zagreb as a place of suffering and resistance by visiting important locations related to the operations of the Ustasha regime, crimes, places of suffering during World War II and the development and most important actions of the illegal movement of anti-fascist resistance. In addition to the epidemiologically allowed number of participants, the Ambassador of France, Nj. E. Gaël Veyssière and the Ambassador of Switzerland, Nj. E. Emilia Georgieva joined the walk through Zagreb.

At the beginning, the audience was addressed by Professor Žarko Puhovski and Documenta’s Director Vesna Teršelič, while the memorial walk was led by Tena Banjeglav, a researcher for Documenta and one the authors of the guide “Zagreb in war, resistance, creativity and memory” which was presented on 6th April 2021. Unlike the first memorial walk held on 27th March 2021, when participants started the walk from today’s Student Center, the second memorial walk started in front of the building of today’s USKOK (Office for the Suppression of Corruption and organized crime) in Vlaška 116 where on the 10th April 1941, Slavko Kvaternik announced the “resurrection of the Independent State of Croatia” in the building of “Radio Zagreb”. The participants then headed to Tuškanova 15 where the illegal radio station was located – a very important medium of the Communist Party for communication with citizens and gaining new members, which survived with frequent changes of location, until the end of the NDH. After Tuškanova, the participants headed to the “Trg žrtava fašizma”, where the building of the Croatian Society of Fine Artists, better known as the “Mosque”, is located, and where, after the NDH was founded, the Ustasha authorities decided to build three minarets and turn the existing building into a mosque. Near the Square there are also buildings of the former prison (Trg žrtava fašizma 10) founded by the Gestapo together with the Ustasha regime and the Headquarters of the Ustasha Surveillance Service (UNS) in Zvonimirova 2. At the following location in Križanićeva Street, the participant could find information about the building where four schools are located today, which once served as a transit camp from where Jews were transported all the way to Auschwitz. Also, during the remembrance walk, the building of the Jewish community on the corner of Palmotićeva and Petrinjska was visited, as well as the prison in Petrinjska. The walk ended at the site of the former synagogue in Praška Street, where the group learned about its history and interesting facts about the Post Office in Jurišićeva street, the site of the largest organized anti-fascist action in Zagreb.

The guide: “Zagreb in war, resistance, creativity and memory” is publicly available on the Documenta website and can be downloaded at the following link: ttps://documenta.hr/publikacije/ 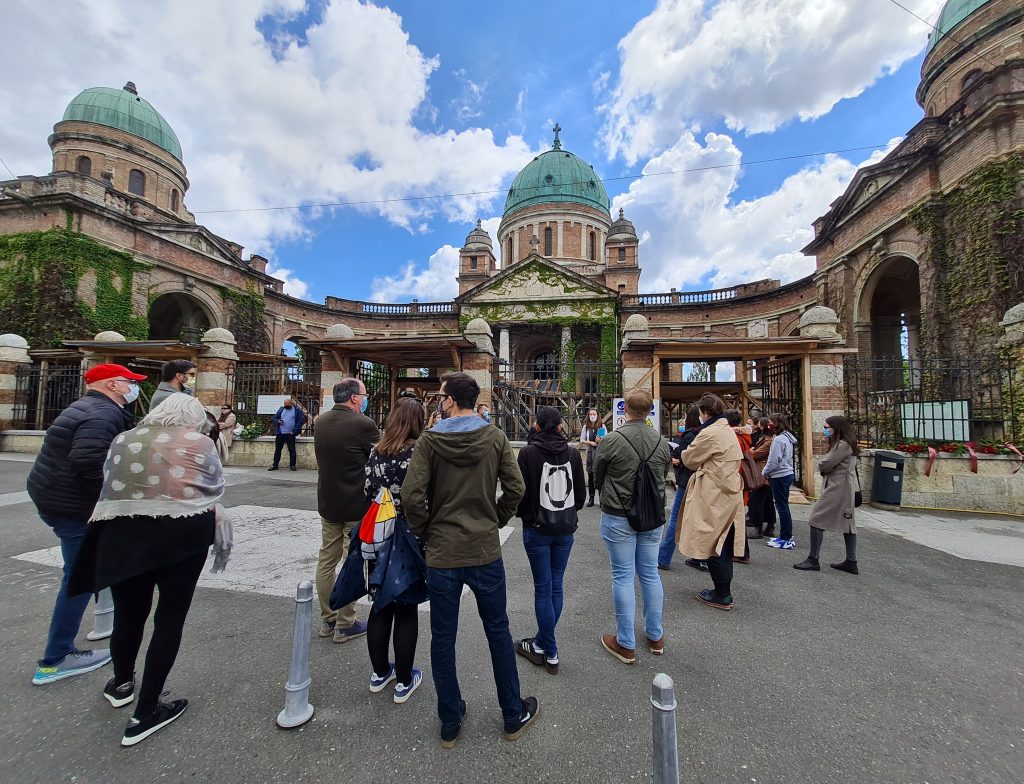 The third remembrance walk took place on the 79th anniversary of the liberation of Zagreb.

On the day of the liberation on Saturday, 8th May 2021, another memorial walk was held, organized by Documenta – Center for Dealing with the Past. At the beginning of the walk, Director of Documenta Vesna Teršelič, addressed the audience, emphasizing that “we celebrate because the entry of partisans into Zagreb finally ended the Ustasha, fascist and Nazi terror”. Ognjen Kraus, President of the Coordination of Jewish Communities, pointed out that “Victory Day means the end of the Holocaust in the history of mankind “, and Tena Banjeglav, one of the authors of the publication” Zagreb in war, resistance, creativity and memory, a Guide to Zagreb in the Second World War ”, which is available at the link: https://documenta.hr/publikacije/, presented the locations of suffering and resistance. The walk was attended by the Ambassador of Canada H.E. Alan Bowman and the Ambassador of Israel H.E. Ilan Mor who presented the culture of commemoration in Israel.

During the walk, the participants visited the Jewish Cemetery on Mirogoj and laid flowers at the statue of Moses, which is dedicated to the Jews killed in World War II. Addionally, they laid Flowers at the Tomb of Children from Kozara, where the remains of hundreds of deceased children, brought from the Stara Gradiška camp in the rescue operation Diana Budisavljević were buried, and at the Tomb of Folk Heroes, where folk heroes and other members of the labor movement of Croatia and Yugoslavia were buried.  The walk continued in the city center near the Post Office in Jurišićeva, in memory of the action carried out by illegals on Sunday 14th September 1941. Then followed a visit to the location of the prison in Petrinjska where, among others, writer Ilija Jakovljević, author of „Konclogora na Savi”, was imprisoned. The walk ended with a tour of the site of the former Synagogue in Praška Street.

The celebration of the liberation continued by showing a video on the 76th anniversary of the victory over fascism and Nazism on social networks, as part of the joint European campaign #weremember #mipamtimo, in which Documenta cooperates with partners from Slovakia, Czech Republic and Hungary, available at: https://fb.watch/5oYf2ymsIj/ 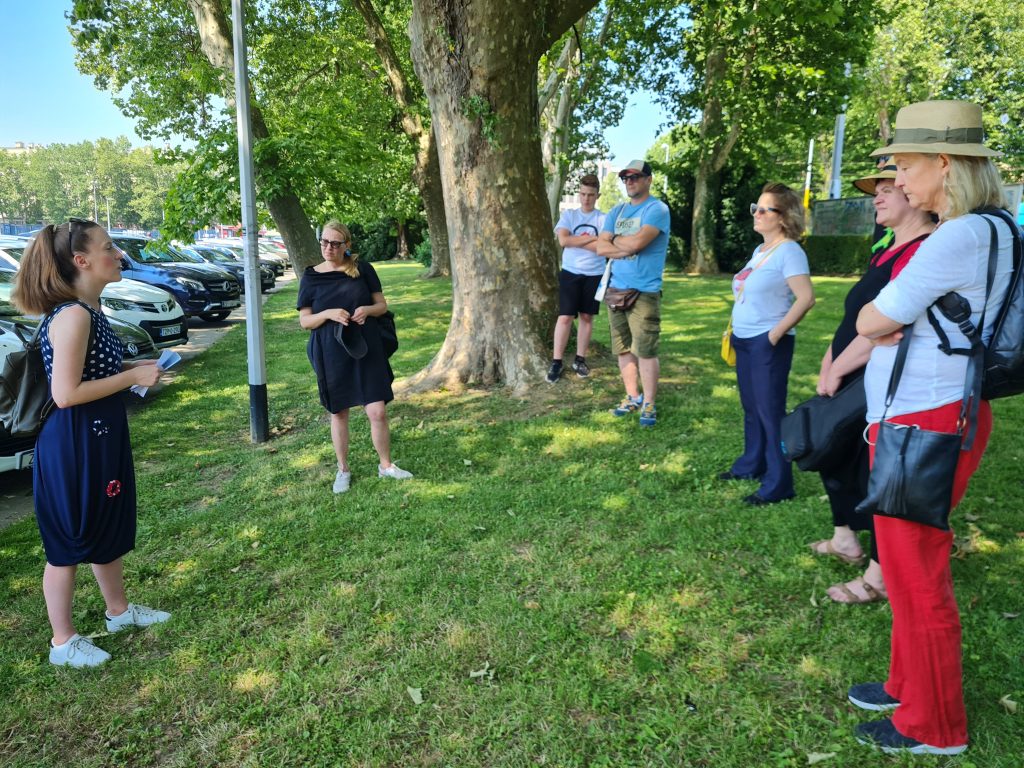 On the Day of Anti-Fascist Struggle, the fourth memorial walk was held

On the Day of the Anti-Fascist Struggle, on Saturday 19th June 2021, the fourth in a series of remembrance walks was held, organized by Documenta – the Center for dealing with the past in cooperation with the Anti-Fascist League of the Republic of Croatia. The remembrance walk was held in memory of the 80th anniversary of the founding of the First Sisak Partisan Detachment on 22nd June  1941. Given the occasion for the event, the emphasis during the walk was placed on a tour of locations associated with the illegal movement and resistance of anti-fascists in Zagreb.

The participants of the walk gathered at 11 am near the Maksimir Stadium, where on 26th May 1941, one of the largest actions of solidarity of young Croats and SKOJ members with Jews and Serbs took place. The Director of Documenta, Vesna Teršelič, addressed the participants, emphasizing that the youth of Zagreb at the  stadium refused to listen to the Ustasha call for division. Instead of separating from their colleagues, in a great gesture of solidarity, all Zagreb high school students moved to the same side to which the Ustashas sent Serbs and Jews, emphasizing “that even today we should oppose the distortion of history and look for ways to include facts about actions like this in educational primary and secondary school programs”. Teršelič also mentioned the film “„Akcija stadion“ directed by Dušan Vukotić, who wrote the script together with Slavko Goldstein. The Author of the guide Zagreb in War, Resistance, Creativity and Memory, a guide to Zagreb in the Second World War, and the leader of the memorial walk, Tena Banjeglav, reminded that since the beginning of July 1941, prisoners had been shot from prisons and concentration camps in Zagreb. The main places of shooting were Dotrščina and the Stupnički Lug forest in Rakov Potok. However, the first shootings took place in Maksimir.

Later on, the participants visited the building of the former Jewish nursing home Lavoslav Schwartz, from which all the protégées, were evicted on 11th April, before the Nazi army confiscated the building together with all its inventory. The walk continued with a visit to the main Post Office building in Jurišićeva, the venue of one of the largest actions of illegals who blew up the Post Office building with a powerful explosion on 14th September 1941, interrupting all telephone and wiretapping connections of Ustashas and other occupiers in other cities in Croatia and in Europe. The participants then laid roses and bowed to the Baković sisters, who are a symbol of resistance in Zagreb. They also got acquainted with the tragic story of Lee Deutsch, Zagreb’s “čuda od djeteta”, who was deported to Auschwitz due to her Jewish origin. They also visited the location in Klaićeva Street, where there was an illegal printing house in the Pavešić family’s apartment, which operated successfully for a long time.

The walk ended at the Academy of Fine Arts in Ilica with a story about another hero of resistance in Zagreb, Diana Budisavljević. In the building of the “Gluhonijemog zavoda”, today´s Center for Education “Slava Raškaj”, lived about 5,000 children which were rescued from the Stara Gradiška camp in August 1942.

The program was enriched by the performance of Bilećanka by musician and artist Davorka Horvat, available at: https://ne-np.facebook.com/DocumentaZagreb/videos/bile%C4%87anka-davorka-horvat/2881144032145909/

The guide: “Zagreb in war, resistance, creativity and memory” is publicly available on the Documenta website and can be downloaded at the following link: https://documenta.hr/publikacije/ 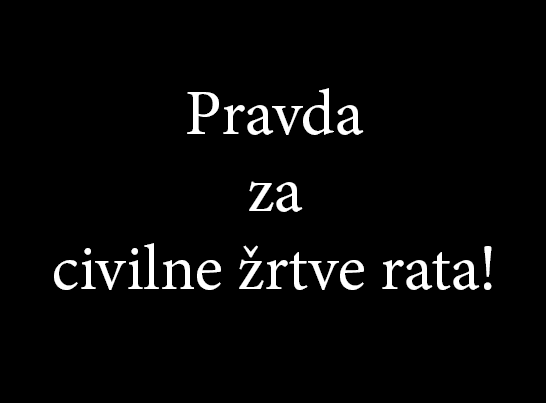