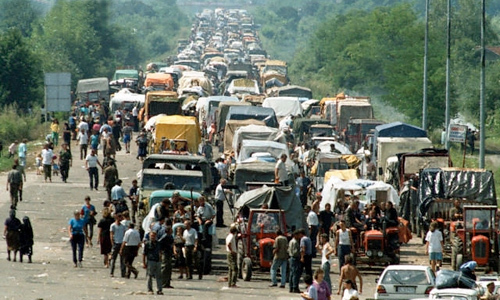 Following the announcement by the Prosecutor’s Office of the Republic of Serbia of an indictment against a Croatian army pilot for bombing civilians near Kapljuh in the village of Bravsko and Svodna in August 1995, Croatian authorities have announced they will refuse to review the indictment when and if it becomes final. The jurisdiction of the Serbian authorities for possible prosecution of crimes is denied, and as in the case of Croatian generals, it is denied that any crime took place. Mate Granić said the refugees „…had mixed with tanks and trucks transporting weapons from Croatia to Bosnian Serbs“, making the convoy a legitimate military target, in his opinion. However, he admitted that „of course there were collateral victims, just like in Operation Storm.“.

Since there was no timely action by the judiciary of the Republic of Croatia, we welcome the announcement of indictments from Serbia because we believe that every war crime must be prosecuted. We call on the competent institutions to agree as soon as possible in which country the proceedings will continue. If the indictment is confirmed, we advocate a trial in Croatia, in the presence of the defendants. We do not oppose the universal jurisdiction of the courts, neither in Serbia nor in any other country, because its purpose is to prevent impunity and oblige countries to prosecute perpetrators of all crimes against values protected by international law.

Back in 2012, Documenta warned that the crime was committed and that it had not been investigated. The announcement by the Prosecutor’s Office of the Republic of Serbia is a direct consequence of the reluctance of the Croatian authorities and the judiciary to thoroughly investigate all the circumstances of these events and to determine the possible criminal responsibility for them. After Croatia’s successful accession to the European Union and judicial reforms that included strengthening institutions in the investigation of war crimes, their prosecution, and the development of victim compensation mechanisms, this case is clear example of the failure of these efforts. The Republic of Croatia and its judiciary have failed to determine who is responsible for the deaths of its own citizens and under what circumstances.

It should be reminded that the crime took place on August 7, 1995 at around 10 am in the village of Bravsko in neighboring Bosnia and Herzegovina, when 9 people lost their lives, four of them children, while a number of people were slightly or seriously injured.

On that day, two MIG-21 supersonic planes of the Croatian Air Force targeted a convoy of civilians from southern Lika and northern Dalmatia, 30 kilometers deep in the interior of BiH, who left their homes in fear during the military-police operation “Storm”. A convoy of civilians was moving on the so-called Petrovac road, between Bosanski Petrovac and Ključ. Then, near Kapljuh in the village of Bravsko, two planes flew over it from the west, ie from Croatia.

According to witnesses (locals and refugee survivors), only civilians were in the convoy, and there were no members of any military units nearby. The planes flew over the convoy very low and relatively slowly, and the pilots undoubtedly had to see that it was civilian vehicles, women and children. However, after the first flight, they turned around, rocketed the convoy on the way back, and finally flew back in the direction of Croatia.

We also emphasize that the mentioned crime took place on the last day of Operation „Storm“, when there was no real threat to Croatian troops, and deep in the territory of neighboring Bosnia and Herzegovina.

On the same day, another similar crime took place, also in BiH, when Croatian Air Force planes rocketed the second part of a convoy of refugees from the Kordun and Banija areas. According to the information available to us, at least three people were killed in the attack on a convoy of civilians in the village of Svodna near Novi Grad/Bosanski Novi: Rade Galogaža (1955), Marta Galogaža (1935), Mile Malobabić (1953) from Slavsko Polje.

Recalling this example and remembering the innocent victims, we would like to remind the public and relevant government institutions once again that these crimes were committed and that no one was held accountable. We also remind of the unfulfilled obligation to detect and prosecute perpetrators of war crimes against civilians.

Documenta – Center for dealing with the past