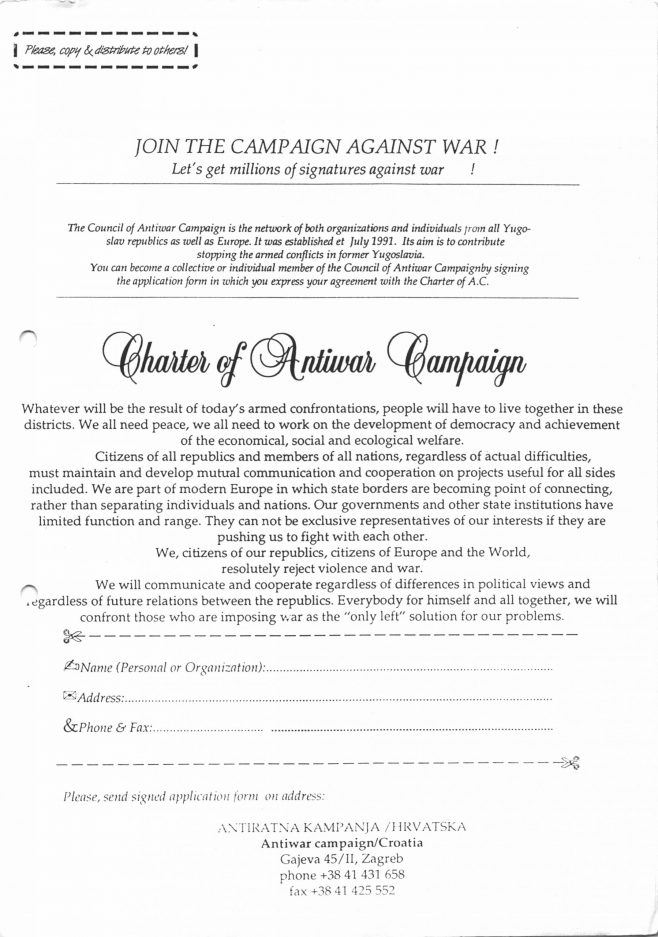 On this day, 4 July 1991, the Antiwar Campaign of Croatia was launched with the “Call to all concerned parents and all people of good will – let’s stop the war”. Over the years, the AWCC developed into a network of human-rights, peacebuilding and anti-war initiatives, organisations and individuals, which went on to play a critical part in shaping the Croatian civil society. The basic idea of the AWCC was that it is imperative to safeguard human rights during the war, despite such formidable and complex social and political events such as all-out war and the formation of new states.

Today, 31 years after the AWCC was founded, the ideas contained in the Charter of the Antiwar Campaign still matter. Their significance becomes apparent when we look at its key elements: coexistence after conflict, the need for mutual communication among peoples, the need to develop democracy and economic prosperity as an interest that is common to all. In this sense, the process of dealing with the wartime past and overcoming the problems this past has engendered is far from finished despite the more than 30 years that have elapsed since.

The ongoing significance of the Charter is also reflected in the war that is currently raging in Ukraine, caused by the Russian aggression. As the words introducing the Charter state, “however today’s conflicts may be resolved, people will continue to live alongside each other in these areas”. In the nightmare caused by this act of aggression, we are happy to see signs of international European solidarity, to witness a developed civil society – anti-war and peacebuilding organisations focussed on human rights protection in Ukraine; likewise, we are saddened by the Russian regime’s brutal assaults on similar organisations in Russia. By starting this war, the Russian regime did not only imperil the population of Ukraine; it has also initiated a new stage in its confrontation with its own population, especially those parts of it that have systematically been warning about the numerous problems that are part and parcel of the policy of the Russian regime.

To the extent that the messages of the Antiwar Campaign Charter are still topical today, we call for them to be revived. The Antiwar Campaign has left a legacy of knowledge and experience that can be used for the tasks that are ahead of us today. Let us use them for the benefit and the future of the entire Europe.