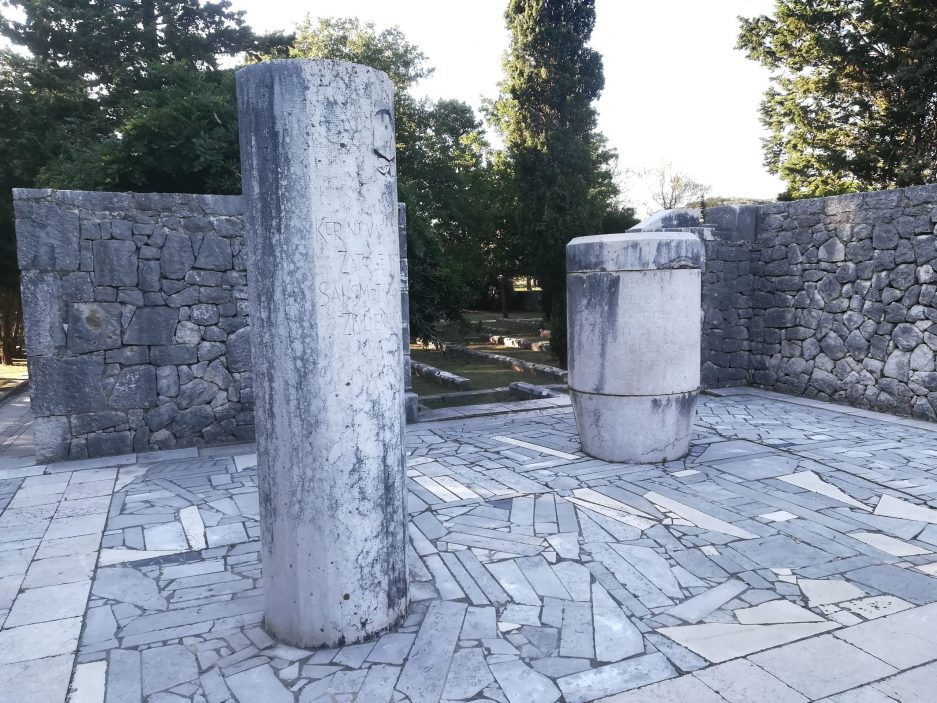 Italian presence in the Balkans

The relations between Italy and Yugoslavia in the 20th century were characterized by disputes and tensions over the control of Dalmatia and the city-port of Rijeka. During WWI, the Kingdom of Italy signed the Treaty of London, according to which the country would gain the territories of Istria and northern Dalmatia, in exchange for the declaration of war against the Triple Alliance. However, at the end of the war, the treaty was nullified. With the Treaty of Versailles, the vast majority of Dalmatia, except for Zadar and the islands of Lastovo and Palagruža, became part of the newly formed Kingdom of Serbs, Croats and Slovenes, while Rijeka ended up under the control of international forces in order to resolve the question of its territorial affiliation. Despite the attempt of Gabriele D’Annunzio to take control of the city with his Impresa di Fiume, the signing of the Treaty of Rapallo in 1920 declared Rijeka a free state and ensured a temporary solution to the Italian-Yugoslav dispute over the north-eastern Adriatic border. Still, with the appointment of Benito Mussolini as the Prime Minister of Italy in 1922, rising of border nationalism, and the beginning of the more decidedly revisionist phase of fascist foreign policy, tensions grew stronger. Cases of armed violence against the Yugoslavs started with the march of D’Annunzio forces to Rijeka and intensified during the fascist rule, which was marked by the first killings in Vodnjan in January 1920, the burning of Narodni Dom in Trieste, and the burning of Narodni Dom in Pula in July 1920. Forced Italianization of family names, imprisonment, and other forms of pressure and violence by fascist forces ensued, leading to the ethnic cleansing of Croats and Slovenes, thousands of whom tried to find shelter in the Kingdom of Serbs, Croats and Slovenes, later Kingdom of Yugoslavia.

The Italian occupation began on the 6th of April 1941 when the Axis powers invaded the Kingdom of Yugoslavia. Italy annexed parts of Slovenia (Province of Ljubljana), areas of the Dalmatian coast, together with various Adriatic islands, and the Bay of Kotor, today in Montenegro. In the Slovenian and Croatian territories, the fascist government constituted two different forms of government: the first part comprised the annexed territories (Governorate of Dalmatia, Province of Ljubljana and Province of Rijeka) that were under civil authorities and the second part comprised occupied territories that were under the direct authority of the Italian Armed Forces.

In the annexed and occupied territories, the fascist forces promoted an aggressive policy of domination and colonization and resorted to repressive methods which included the burning of villages, killings of civilians, and deportation of local people to concentration camps for Slavs, set up in Italy and the occupied areas. The camps set up in Yugoslavia had the purpose of cutting the contact between the population and the local partisans and creating a vital living space for Italian settlers. Even though the purpose of the camp was not the systematical killing of internees, they still had to endure restrictive and harsh conditions that led to thousands of deaths, including those of many children, mainly due to sicknesses and starvation.

During 1942 and 1943, thousands of anti-fascists, local dissidents, members of marginalized groups, Jews and Slavs were held in the concentration camp Kampor, on the island on Rab, today a part of Croatia but at that time a part of the occupied “Italian Yugoslavia”. The population of the camp varied over time because the prisoners would get transferred to other locations, however, researchers found that at least 1500 men, women, and children lost their lives in Kampor, mostly due to starvation.

According to the Slovenian historian Tone Ferenc, the idea of building a large concentration camp on the island was already discussed by Italian fascist forces in May 1942, when the camps in Lovran, Bakar, and Kraljevica started to become overpopulated. The initial plan envisaged the construction of a civilian internment camp for 20,000 people. Kampor, the place chosen for the construction of the concentration camp, was not far away from Rab, the largest urban center on the island, and was situated on a plain between two coves. Still, the selected site had numerous shortcomings: it was not easily reachable, the construction costs were high, and there were problems concerning the transport and logistics. The camp was supposed to be divided into four different zones or sectors (camp 1, camp 2, camp 3, camp 4) so that each of these could house 5000 internees. However, between the end of July and the beginning of August 1942, when the first internees started to be brought to Rab from Ljubljana and Čabar, only several barracks and tents for six people had been set up in camp 1. Since the constructions were not completed in time, the internees had to spend the beginning of winter in tents on an island notorious for Bura, a bitter north-easterly wind. In the autumn of 1942, the first wooden barracks started to be built and in November 1700 tents were set up along with 500 beds in the hospital and infirmary. However, winter clothing, shoes, and blankets were not available to a large number of internees. In the spring of 1943, the work on camp 3 started, intended to house the Jews already interned in the Kraljevica camp and other localities in Dalmatia.

Luigi Brucchietti, commander of the XII battalion of the Carabinieri Reali, reported on the first arrivals of the internees in Rab in 1942. In his diary he writes that in only seven days in August more than 4747 people were interned in Kampor. The internees kept coming in the following months. He also reports that in October 8260 people were interned and in December the number was 2970.

Since the winter of 1942, however, the number of internees on the island of Rab started to decrease steadily as the command of the II Armata, which controlled and supervised Kampor, decided to diminish its capacity and to convert it to a place of sorting and transit. This decision was taken due to the difficulties of reaching the island with the needed provisions and supplies. For this reason, the number of internees in December 1942 diminished to 6577 people and in February 1943 to 2857. In November 1942 the first transfer concerned mostly women and children, who were sent from Kampor to the concentration camp Gonars in Slovenia. By July 1943, around 2661 Jews were held prisoner in Rab and then transferred in August to Italy or other annexed territories.

Life in the camp was characterized by food scarcity and terrible hygienic conditions which were the cause of many diseases and deaths. The main causes of death are related to heart and respiratory problems, such as bronchitis and pneumonia, infections, starvation, and organ failures mainly due to food scarcity. In March 1943, of the 2654 internees in Rab about a half were sick: 358 were hospitalized and 851 were held in the barracks set up for internees who did not have any specific symptoms but were suffering from malnutrition. At the time, the camp leadership claimed that the living conditions in Kampor were bearable and blamed the deaths on the fragile physical and psychological status of the internees or on their advanced age.

Until today, it has not been possible to exactly establish the number of deaths in the camp or the various hospitals connected to it. Herman Janež, a direct witness interned with his family when he was a child, first in Kampor and then in Gonars, researched the camps and was able to provide a list of names of 1477 victims. The military history institute of Belgrade has published the following figures: a total of 9537 persons, including 4958 men, 1296 women and 1039 children were held in the camp most of which came from the province of Ljubljana and Rijeka, including 2244 Jews. The number of deaths must be higher than 1009, the number which corresponds to the victims buried in the cemetery of Kampor.

With Italy’s capitulation on the 8 September 1943, the majority of Italian forces in the camp, guards and soldiers, as well as doctors and nurses, left Rab in a hurry. It was the perfect occasion for the prisoners to organize an uprising: they overpowered the remaining guards and took their arms and food. The uprising was being organized in secrecy for months by a group of about 160 camp internees. At the same time, over two hundred Jews founded a Rab Battalion which joined forces with the Slovene and Croat internees, who formed four battalions of their own. This brigade was then renamed the 16th Slovenian National Liberation Brigade of Rab. The Rab Brigade left the island on 12 and 13 September. Other volunteers joined, in many cases also former prisoners willing to fight. In the end the brigade consisted of around 1750 men. The majority of these poorly trained soldiers soon joined the Partisan forces in Slovenia and Croatia in their endeavor to continue the struggle against oppression.

See the cases of Anton Vratuša in the video (min. 5:40) and the personal stories of Eva Akerman and Dragica Vajnberger in the section „In the words of the witnesses”. The fate of other internees held on Kampor is difficult to trace back. The majority of Jews who stayed in the camp because they were too weak to run away or join the brigades were captured by the Germans and sent first to the concentration camp Risiera di San Sabba and then to Auschwitz. Some of the former prisoners migrated first to Italy and then to other continents, mainly to Southern America.

The Memorial Complex for the victims of Kampor was designed by the Slovene architect Edvard Ravnikar, between 1952 and 1953. The Complex marks the spot of an informal burial ground, it contains the graves of the prisoners of the camp and functioned both as a war cemetery and official state monument. Edvard Ravnikar was first approached to design the memorial cemetery by the Society of Slovene Servicemen, a group of Partisan veterans, in 1952. The intention was to mark the tenth anniversary of the liberation of the concentration camp and the founding of the Rab Batallion. The initial proposal for a memorial involved gathering up the scattered human remains and disorderly graves surrounding the site of the former concentration camp and installing these in a monumental ossuary. Ravnikar directed this idea towards a more evocative concept: a cemetery as a formalized landscape including an entrance platform, a descending route, parallel rows of graves, several abstract obelisks, a sequence of outdoor rooms, some parabolic structures and a form of a museum. William J.R. Curtis interpreted the work as a sublimation of the terrible past of the place, still, it can re-evoke its horrors. He writes: “…the parallel stone burial slabs allude to the regimental rows of tents or huts, while the oval, metallic discs on stems over each individual grave in the collective framework, recall the identification tags that prisoners were obliged to wear. The structure by the entrance, especially on its street facade, has a markedly fortified appearance, not unlike a bunker … In the Memorial Complex, Ravnikar seems to oscillate back and forth between dark and light, despair and hope, enclosure and expansion. The power of his forms relies in part upon this tense recognition of the interplay between present beauty and past evil”.