The online presentation of the toolkit “Youth work in/for the shrinking cities” took place on 30th December in the presence of panelists and attendees from dozen of European countries.

At the beginning, the moderators emphasized the dramatic context of the presentation due to the recent devastating earthquakes in central Croatia. Sisak – one of the shrinking cities presented in the toolkit – was heavily damaged only a day before the presentation. As it was emphasized during the presentation, this tragedy will most probably contribute to the further drop of population in the region which is already facing severe shrinking.

Following the introduction provided by the moderators, Moritz Borchardt (CGE) and Sandra Rozman (MMH/CYN), Boris Stamenić (Documenta) briefly presented the toolkit as the central result of the project “Strengthening the role of youth work in contesting dynamics of shrinking cities”. The project has focused on building new strategies of social inclusion and civic engagement for youth residing in Europe’s “shrinking cities”. It was implemented during the last two and half years, with the financial support of the European Union in the frame of Erasmus+ programme.

The project brought together eight partner organizations from four countries: Asociación Caminos (Spain), Colegio Oficial de Ciencias Políticas y Sociología de Andalucía (Spain), Croatian Youth Network (Croatia), Culture Goes Europe (Germany), Documenta – Center for Dealing with the Past (Croatia), EJBW (Germany), UMAR (Portugal) and YouthCoop (Portugal). The organizations embraced the idea of conducting research and mapping that would ensure a better understanding of the similarities and differences between shrinking cities in Europe while at the same time providing methods for learning how to deal with critical socio-economic dynamics at different local settings across the EU.

Jorge Gomes (YouthCoop) provided the definition of youth work as an action targeted at young people to support their personal, social and cultural development through non-formal and informal learning. It is voluntarily, young people and youth workers are partners in the learning process which include exchange of experience, so Gomes. Thereby the main idea is to bring activities to the places where youngsters are living.

Ammalia Podlaszewska (CGE) described the shrinking as a loss of population during a period of time, due to economic, demographic and structural changes which are contributing to the lost of the city’s size and population. In the context of youth work, a shrinking cities leads to shrinking infrastructures (decline in demand of public transport, houses, schools and services) and creates a downward spiral bringing to city deterioration and perception of lack of future options (lack of social and cultural content and events, as well as job and economic opportunities).

Following the brief explanations of the key terms, the examples of good practice of youth work in shrinking cities across Europe have been presented. Ammalia Podlaszewska represented the cases from the region of Thuringia in Germany. The Project “Beulwitz” from Saalfeld is focused on the social integration of refugees and strengthening of the social contacts between the citizens and the new comers. From the other side, the project “Stadtmenschen” in Altenburg is predominantly focused on the improvement of the citizens participation in the local community.

Jorge Gomes (YouthCoop) presented the selected cases of youth work in Portugal. The Project “Acolher” in Săo Pedro do Sul is fostering the intergenerational dialogue in the local community and promoting socially and ecologically sustainable models of tourism in the region while the “Ideria” project in Covilhã support young people to overcome the difficulties on the beginning of their professional careers.

Angela and Daniel Pittl (Asociación Caminos) introduced the examples of good practice of youth work in Cadiz and Granada, two shrinking cities in Andalusia in southern Spain. The speakers emphasized that the project gave them the chance to develop a discussion with the youth workers and stakeholders in the region about youth work and the opportunities it opens for young people in the region. The presented projects “Alendoy” in Cadiz and “Alfa” in Granada are both focused on strengthening of capacities of socially vulnerable youth by providing them social space and important skills.

Boris Stamenić (Documenta) presented the selected cases of good practice of youth work in Croatia: the youth club Skwhat in Sisak and the project “Job club for youth” in Karlovac and Karlovac county. While speaking about causes of shrinking of Karlovac and Sisak, he mentioned several different reasons including demographic crisis in the surrounding villages, drop of working places in the local industry and the forced migrations in the context of Croatian war for independence in the early 1990s.

Following the brief contributions of the project partners, the invited guests from presented shrinking cities and beyond shared their perspective. Diogo Moura Coutinho spoke about his participation in one of the youth projects in Portugal but also about his experience of living in Armenia. Ribke and Valentin Rühlmann presented the situation in Altenburg, a shrinking city in Thuringia with very few young people keen to stay there. Diana Todorova (Documenta) highlighted the case of Bulgaria as a country which is facing severe depopulation for the last three decades and shared the interesting article about the situation in the shrinking city Vidin in northern Bulgaria.

The last part of the presentation offered the opportunity to audience to share their comments or ask questions. Regarding the future perspectives, the next goal is to disseminate the toolkit and bring it to the youth workers, stakeholders and audience interested in the topic of youth work and/or shrinking cities. As it was emphasized at the end of the presentation, this toolkit will not prevent the shrinking of cities and regions, but it may represents a small contribution to the development of sustainable solutions for the European societies in the decades to come.

The handbook is available here. 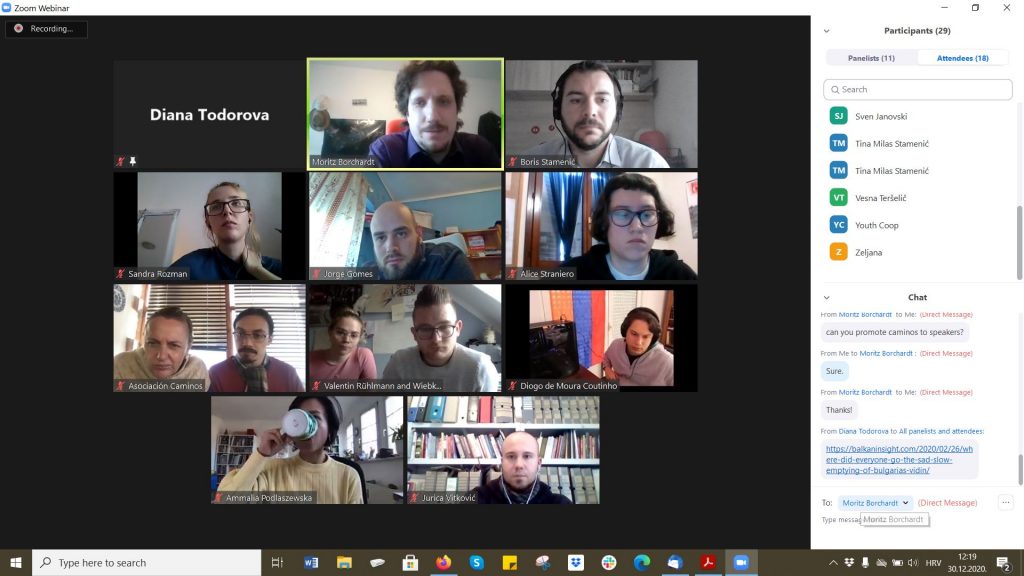