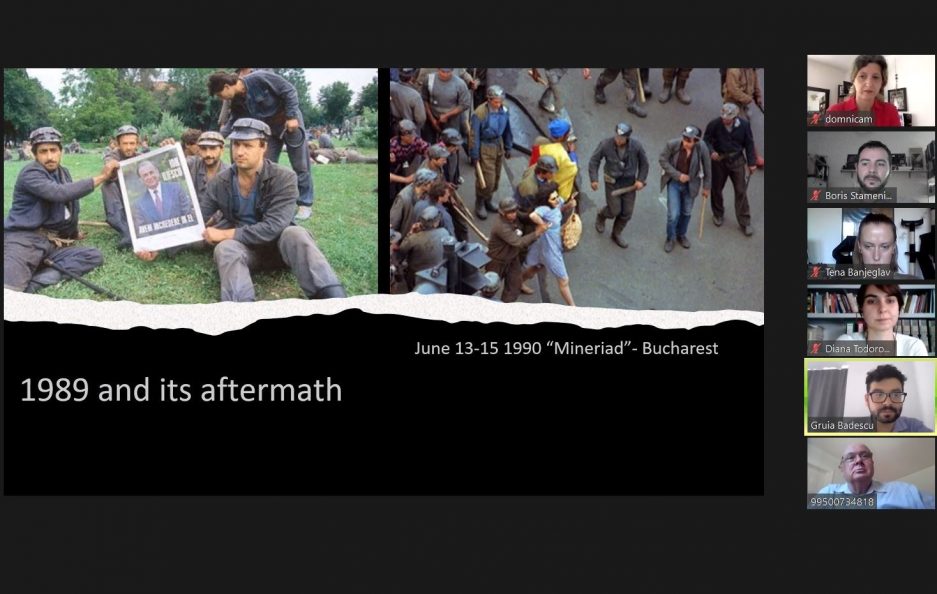 The International Spring Forum was opened on June the 16th with the panel discussion “Living in the divided Europe before 1989”. The discussion revolved around the topic of cross-border mobility before 1989 and illustrated the once existing huge differences in the possibilities for citizens of different European countries to cross the border of the country in which they lived. Participants from Albania and Romania pointed out the symbolic significance of common, yet for them rare items brought from abroad and described how such items had a distinctive place in their households at the time.

The second panel discussion “Democratic Revolutions 1989” was dedicated to the case of Romania. Dr. Gruia Badescu, Domnica Macri and Sorin Ghimici recalled the dramatic events in Bucharest in late 1989. In addition, they introduced the participants to the lesser-known drama of crushing the student protests in the Romanian capital in the spring of 1990.

The third panel “Living in Transition” offered two very different perspectives on the transformations that followed the events of 1989. First, prof. Peeter Torop from the University of Tartu presented the post-communist transition in Estonia in the context of comparative studies of political mentality and pointed out the significant changes in the last two decades. Then, Dr. Lana Mayer from the University of Osijek presented herself through a very personal story about growing up as refugee in Germany, returning to post-war Croatia in the late 1990s and re-examining her identity through the two forced departures from her living environment.

The fourth panel “Legacy of Democratic Revolutions 1989” brought together speakers from Poland, Germany and Hungary. In the panel moderated by Dr. Annemarie Franke from the European Network of Remembrance and Solidarity Institute (ENRS), Yolanta Grygorczyk, Elżbieta Moczarska, Dr. Burkhard Olschowsky and Dr. Gabor Danyi recalled where they were in the autumn of 1989. The contextualization of the mentioned events by the panel-participants pointed out the importance of generational dialogue as well as family influence on the interpretation of past events.

The final panel “Future of Europe” offered an opportunity to summarize the impressions and to discuss current and future challenges for European societies. The discussion that developed showed many different experiences of the democratic changes of 1989, and also various dimensions of the open questions about the future of Europe that are relevant today. It was concluded that challenges like migration, Brexit, corruption and the growing populist movements contribute to doubts regarding the European Union as a factor for stability. However, the participants shared a vision of a common European future, which has potential for improvement and expressed a healthy dose of optimism.

The international spring forum was the second activity in the frame of the project “Reshaping the Image of Democratic Revolutions 1989: European contemporary Perspectives and forgotten Lessons from the Past”, co-funded by the Europe for Citizens Programme of the European Union. The project seeks to remind European citizens about the democratic revolutions 1989-1990 as a period of arduous struggles for pluralistic democracy and peaceful coexistence in Europe with the aim to strengthen the contemporary commitment of the European citizens to the preservation of democratic pluralism and democratic institutions. While fostering the transnational dialogue of European citizens about 1989 and its consequences, the project increases awareness among the citizens about the similarities of European countries and thereby contributes to the strengthening of European identity. Furthermore, the project fosters a resilience against contemporary populist narratives based on the promise of a return to the allegedly “better past”.

Enclosed you can find the report from the International Spring Forum