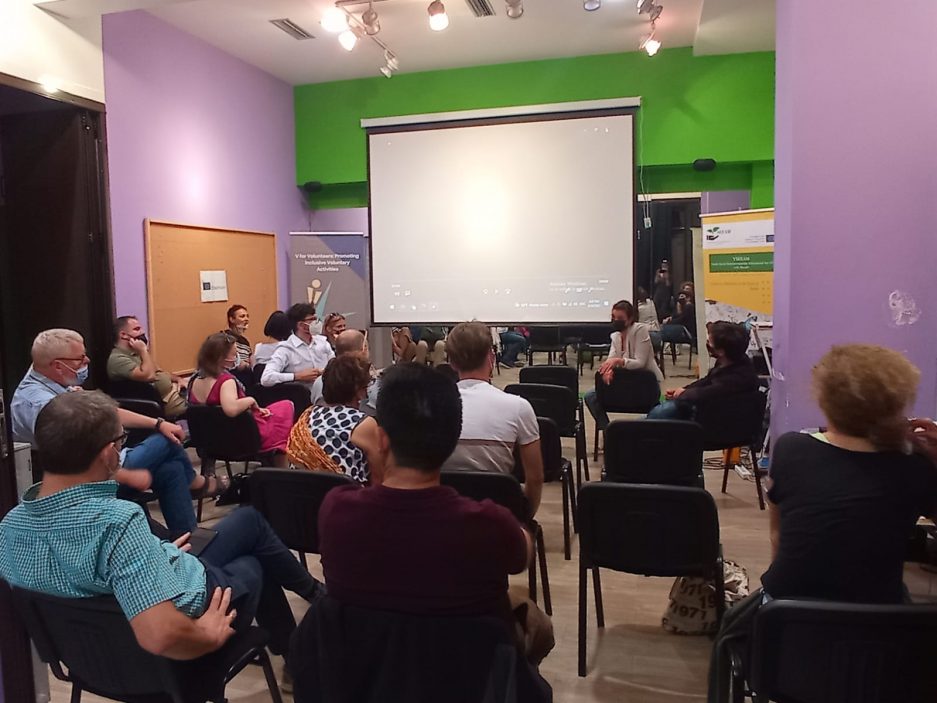 From September 22 till September 26, 2021, Documenta – Centre for Dealing with the Past together with partner organizations from 7 European countries organized the Seminar for history educators “Reshaping the image of democratic revolutions 1989” in Thessaloniki, Greece.

The event brought together history teachers and youth workers from 10 different countries to share their experience and exchange working methods and knowledge. During the seminar, they worked together in several workshops dedicated to the democratic changes that took place in 1989 and the transition to democracy and free market economy that followed in the 1990s.

Following an informal exchange in the evening before, on September 23 the official start of the seminar was given. After a round of introductions, all participants got to learn more about the project that brought them all together in Thessaloniki – the project “Reshaping the image of democratic revolutions 1989: European contemporary perspectives and forgotten lessons from the past”, co-financed by the European Union through the program “Europe for Citizens”.

Then followed the screening of the educational film “How did 1989 change Europe?”. The film collects personal memories of the period and is designed both for use in formal and informal education.

The following working session focused on a presentation of the manual “1989: a lesson from the past” which collects didactic materials aimed at improving the working methods of history educators who deal with the topic. The manual is written by Miloš Vukanović and Igor Radulović from HIPMONT (Montenegro).

A short presentation about the so-called „generation of transition“ in Eastern Europe gave impulses for a group discussion about the realities of teaching about 1989 in different European countries. Each history educator gave a short overview of the curricula they follow and the way it incorporates 1989 and its aftermath. The last working session of the day was dedicated to the sources available for history educators to use when they work on the topic of the democratic revolutions of 1989.

On September 24 the work program of the seminar started with the workshop „The untold stories of 1989“. The participants were divided in national teams and were given the task to detect the aspects that are left out of the mainstream narrative about 1989 in each country.

The second session of the day was built around another workshop, „The day that changed everything“. The task was to describe an event which is symbolic of 1989 and the transition to democracy for each country and to do so in 10 sentences and 1 photograph. The participants were presented with an example of a similar text and spent the rest of the afternoon brainstorming, preparing their texts and searching for photographs.

In the evening, a public presentation of the project and the educational film was held in the center of Thessaloniki. The event was hosted by United societies of Balkan in their public space BalkanHeart.

On September 25 the participants began the day by presenting their work from the workshop „The day that changed everything“. Each group presented their text and provided insight on the background of the story they chose to tell. After the comments and questions regarding the presentations, there was a final round of evaluations during which each participant could share their impressions from the exchange of experiences and perspectives during the seminar.

The last working session of the seminar was designed to define the next steps for the implementation of the project and the responsibilities of each partner organization.

The Seminar is organized in the scope of the project “Reshaping the Image of Democratic Revolutions 1989: European contemporary perspectives and forgotten lessons from the past”.

The project is co-financed by the European Union through the program “Europe for Citizens”.

You can read more about the seminar in the report attached.